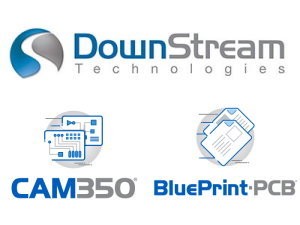 Downstream Technologies has announced the release of new versions of their industry-leading PCB post-processing solutions. CAM350 version 14.6 and BluePrint-PCB version 6.6 build on previous releases in which the company further enhanced its support for flex / rigid flex and embedded component visualization in both 2D and 3D environments.

In addition to Flex DFM, DownStream has also implemented a new API for CAM350 built around Microsoft’s Visual Basic. The new API supersedes the company’s current proprietary macro language, although DownStream will continue to support the current language.

Other enhancements to CAM350 include a new 2D graphics engine based on openGL, support for Net Bridges, and support for IPC-2581 format Rev C. The company also announced minor upgrades to their BluePrint-PCB documentation tool, including a 2D graphic upgrade as well as new capability to transfer a BluePrint panel document into CAM350 for panel design editing.

Both CAM350 V14.6 and BluePrint V6.6 are currently in a Beta test phase and are expected to be released to the market in Fall of 2021.