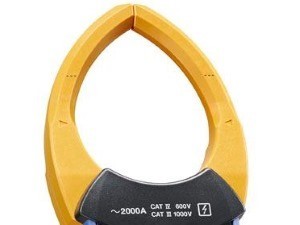 Hioki announced the launch of the AC Clamp Meter CM4141/CM4142 (rated for use with currents of up to 2000A), a pair of clamp AC current meters featuring a new jaw shape designed to make the instruments easier to clamp around wires.

Hioki reduced the width of the jaws near the opening to 11 mm to make the instrument easier to clamp around wires (jaw thickness at the same position ranged from 15 mm to 22 mm in previous products). In addition, whereas the CM3289, which was launched last year with a design that is easier to clamp, can measure cables with a diameter of about 33 mm, the CM4141 and CM4142 can measure cables with a diameter of up to 55 mm, providing the ability to measure even thick cables without needing to connect a flexible sensor (more info).