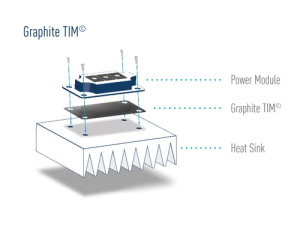 Handling heat is a major challenge when operating power modules in demanding and even harsh industrial or automotive contexts.

Mounted on dedicated heat sinks, heat dissipation is traditionally achieved with a particular layer of grease – that, of course, has to be replaced from time to time. A labor-intensive frequent task, next to the fact that grease naturally doesn’t stay only where it is applied. That, in turn, counter-acts an effective thermal dissipation.

All these issues are addressed – and solved by Panasonic Industry’s GraphiteTIM. Now, the re-nowned manufacturer has released its highly compressible EYGR type, reducing the thermal resistance by filling the gap and the unevenness on the surface of both power module and heatsink, and thus enhancing the thermal dissipation performance.

With a thermal resistance of 0.2 K∙cm2/W (at 600 kPa) and a thermal conductivity in X-and Y- direction from 200 to 400 W/m∙K, respectively 28 W/m∙K in Z-direction, the Panasonic Industry GraphiteTIM types are a promising option for the reliable cooling by high heat transferring per-formance and wide operating temperature range fom -55 to 400°C for power module in many electronic devices: Inverters, converters, automotive control units, medical equipment or server infrastructures will clearly profit from an increase in reliability, longevity and service easiness.

Learn more on the GraphiteTIM on our website or have a look in the brief introduction video.