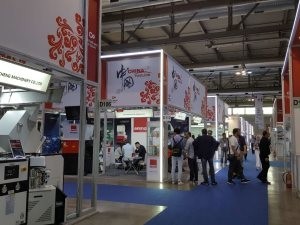 Subsequent to CHINAPLAS 2018 and NPE 2018, PLAST, the triennial international exhibition for the plastics and rubber industries took place from May 29 to Jun 1, 2018, at the Fiera Milano facilities in Italy.

In recent years, economic and trade cooperation between China and Italy has grown deeper. According to the China Plastics Machinery Industry Association, plastics machinery exported to Europe from mainland China has been growing both in numbers and in value since 2015. In 2015, 44,681 units of Chinese plastics machinery valued at US$203.12 million were exported to Europe. In 2016, the export volume increased to 127,399 units, and the value increased to US$226.11 million. In 2017, the numbers further climbed to 288,217 units, amounting to US$315.05 million.

The number and value of China's import of plastics machinery from Europe also showed a general uptrend. In 2015, China imported 2,062 units of machines from Europe with a total value of US$602.68 million. In 2016 and 2017, the numbers of plastics machinery imported were 3,058 and 2,588 units respectively, and the values were respectively US$551.51 million and US$639.72 million. Imports from Italy alone has been going in a similar direction – from 233 units in 2015 at US$73.52 million to 331 units at US$79.18 million in 2017. These figures are demonstrative of the deepening in economic and trade cooperation between China and Europe.

Adsale Exhibition Services Ltd. is the organizer of CHINAPLAS, the world's leading plastics and rubber trade fair. Apart from organizing about 20 exhibitions in China every year, Adsale also proactively promotes China’s enterprises and industry to the international market by organizing China pavilion in various shows overseas. After successfully organizing a China pavilion for Plastindia in February 2018, Adsale once again led Chinese enterprises to the international market at the end of May. As the agent of PLAST 2018 for China and Hong Kong region, Adsale organized the largest ever China Pavilion in PLAST 2018. 80 Chinese enterprises were invited to participate and the area of the pavilion reached 1,610 sqm. Compared to the last edition of PLAST in 2015, the number of Chinese exhibitors increased by 57% and the area increased by 76%.

Ada Leung, General Manager of Adsale Exhibition Services Ltd., expresses her pleasure in seeing the close cooperation among the plastics industries in China, Italy, other parts of Europe. She explains that cooperation between CHINAPLAS and PLAST has been long established. AMAPLAST, the organizer of PLAST, is also the organizer of the CHINAPLAS Italian Pavilion. At CHINAPLAS, the size of the Italian Pavilion has ranked the second among the European pavilions for many years, only after the German Pavilion. It is hoped that Adsale and AMAPLAST, can strengthen the bond and relationship, further promoting trade development of the Chinese and Italian plastics industry.