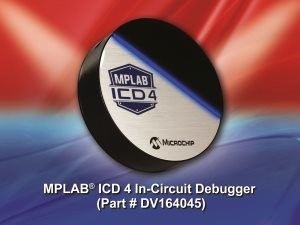 Win a Microchip MPLAB ICD 4 In-Circuit Debugger (DV164045) from DPS. The new MPLAB ICD 4 introduces a faster processor and increased RAM to deliver up to twice the speed of ICD 3 for the in-circuit debugging of PIC® microcontrollers and dsPIC® digital signal controllers. The MPLAB ICD 4 also introduces a wider target voltage range and an optional 1 A of power via an external power supply.

For maximum flexibility, MPLAB ICD 4 features a selectable pull-up/pull-down option to the target interface and programmable adjustment of debugging speed for greater productivity The MPLAB ICD 4’s significant improvement in speed is accomplished through a 32-bit MCU running at 300 MHz. Faster processing, together with an increased buffer memory of 2 MB, results in a product that is up to twice as fast as its predecessor.

Microchip’s MPLAB ICD 4 is easy to use and supports many PIC microcontrollers and dsPIC digital signal controllers in Microchip’s portfolio through the MPLAB X Integrated Development Environment (IDE). This simplifies the design process for customers when they choose to migrate from one PIC MCU to another to meet the needs of their application.

The MPLAB ICD 4 connects to the PC using a high-speed USB 2.0 interface and is connected to the target with a debugging connector which is also compatible with the MPLAB ICD 3 or MPLAB REAL ICE™ In-Circuit Emulator systems. The MPLAB ICD 4 also works with JTAG interfaces.

For your chance to win a Microchip MPLAB ICD 4 In-Circuit Debugger, visit www.microchip-comps.com/dps-icd4 and enter your details in the online entry form.